Casino Rama welcomed back country music artist Wynonna Judd with a sold old venue. Wynonna is on tour promoting her latest release, “What the World Needs Now is Love”.

Wynonna’s stage was highlighted with a video backdrop and theatre smoke which created a mysterious atmosphere. I’ve never been to a Wynonna concert and didn’t know what to expect. I was pleasantly surprised. 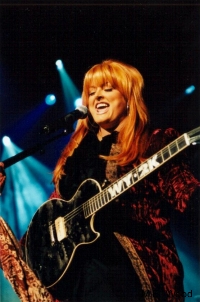 For the intro, Wynonna was heard before seen. Her voice reverberated through the darkness enticing the 5000 fans to a immediate response. She knew how to get the crowd excited.

Wynonna had stage presence, comedic value, and sincerity. She involved her audience with her candour and vivacious discussion. During takes, Wynonna took time to converse with the crowd. “I’m a woman with attitude,” she joked during one break.

During another interlude she said, “It’s hard to find songs that go to the heart and not to the libido.” She called the song “I Will Be”, from her new album, her “anthem.” The chorus is a wonderful example of positive self-talk:

I will be here
I will be strong
I will face my fears
When the night is long
And still go on
I will be brave
I will be bold
Follow my faith
To a higher road
And I’m not there yet
But I will be.

Each of Wynonna’s songs has a message, heartfelt and real. They touch the part of us that still clings to hope.

One of the lighter songs she sang was “Burning Love”, an old Elvis track she recorded for the Lilo and Stitch movie. I guess I should mention her use of guitar. She certainly can rock it, but for me it was her voice that stood out. Her voice is a powerful locomotive that can’t be ignored.

During “Girls With Guitars” the video screen I mentioned earlier played a montage of images from her childhood, teen years and life with Mom as The Judds. Wynonna said, “I’m so proud of my roots,” and it shows, both in her lyrics and her dialogue. Her bond with her mother seems strong.

During “Mama He’s Crazy” she talked about her love and friendship with her mother. They started travelling when she was 18 and her mother was 36. Naomi retired from the business in 1992 after she was diagnosed with Hepatitis C. It’s apparent that Wynonna misses her mother’s company but she teased about having a great babysitter for the kids.

My all time favourite Judd song is “Grampa” so I was biased when she sang it. I don’t believe there was a dry eye in the house. Wynonna encouraged fans to join in singing the chorus. 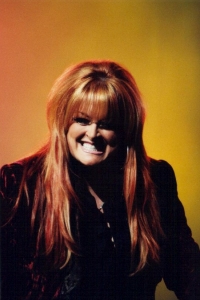 “I like to get funky” is how she led into “No One Else on Earth.” She was funky and it thrilled the audience.

One and a half hours later, the official concert was over. The crowd screamed and applauded while a few roadies began to dismantle some cables. Wynonna returned to the stage with her three backup singers and sang “How Great Thou Art” a cappella. Now if you’ve read any of my other reviews you know I get pretty excited about anyone who does this. There’s nothing between the ear and the voice, especially a voice that is almighty and powerful.

Before closing with “Testify to Love”, a song she recorded for the television show Touched by an Angel, she gave a final pep talk. Her parting words are something I will always remember. “I believe in you even if you don’t believe in yourself. You are worthy and you’re perfect the way that you are.” Not many performers make it part of their mission statement to leave their fans with warm fuzzies. Wynonna is a beautiful woman and a true gem to experience in concert. She is a performer worth spending time with. I left, having received a well-rounded experience.