Hide Search
You are here: Home / Miscellaneous / Wham Bam, No Thank You Mam

Hope you’re having a good week. As I said in one of my newsletters I was having one of those great days, moving along minding my own business, doing errands etc. chatting up the odd cashier and then out of no where a car turned into my lane.

There was nothing I could do but whack him with the van. Fortunately no one was hurt but it really puts a damper on the day and raises the stress levels. When it first happened I was pretty calm, cool and collected. Actually I said the f-word 10 times in a row then I was calm, cool and collected. After backing into the Taco Bell/KFC I asked him if he was ok, he asked me if I was ok. We were both ok.

He wasn’t too concerned about insurance and the police because he didn’t think the little dent in his car warranted it. I asked him if he looked at mine? He said no. I walked over to mine and Whoa! baby! A bit more damage than his. So I popped into the Taco Bell to call the police. Like I said I was calm, cool and collected. Until the manager handed me the phone. Waaaaaaa! So embarrassing. Luckily she had the number for the police station still in her head and dialed for me. She then handed me the phone so I could call Jeff. I was suddenly Ms. calm, cool and collected again. For 30 seconds at least when Jeff got on the phone. He was able to decipher through my blubbers what happened and where I was. He was on his way. What a sweetie.

Meanwhile, I went to find the gentleman who turned in front of me. He was sitting calmly inside the Taco Bell enjoying the view outside the window. I informed him the police were on their way. I went outside to wait for the police and Jeff. A man looking a lot like Kenny Rogers approached me saying he witnessed the accident and was just returning after dropping his son off at the dentist. He was nice enough to wait around to give his statement, collaborating mine… the guy turned in front of me. Ugh! I still can’t believe it. According to the witness, the man looked in the opposite direction of traffic and not toward the oncoming traffic. Sheesh.

Anyway, the officer came, introduced himself to everyone and started taking statements. Want to hear something weird? The guy who hit me had the same last name as me. Freaky! As we were waiting our turn the sky decided to literally open up and dump buckets on us. After we were thoroughly soaked we went into Taco Bell to finish up. The officer said he was charging the other guy for an illegal left turn and his insurance company would be paying for the damages.

It was so nice to have two people confirm that I was not at fault but even now I keep going over in my head what I could have done. Part of the learning process I guess.

All the endorphins have worn off and I’m sleepy and achy. The van is having a spa week and will hopefully come back good as new. Hmm. Maybe I should send myself on one too. Right, like that’s going to happen.

Jeff popped by the shop this morning to take some pictures of the work of art. To me they looked worse at the time it happened. Doesn’t that tilted wheel look wild? Oh, guess what the gentleman did after he gave his info to the officer. He went and stood in line for lunch… still not having looked at the damages to my van. 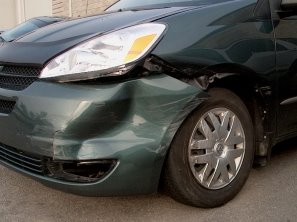