An assistant in the independent film industry, a professional comic, a television producer, an editor, and a curator highlight some of Amanda Stern’s background. Despite the varied career choices she has always fallen back on one constant, writing; having done so since she was eleven. Currently she’s a full-time writer, and looking for the next great experience. Her writing (fiction, non-fiction and poetry) has appeared in publications such as Swink, Venus Magazine, St. Ann’s Review and NY Today. The Long Haul is her first novel. She lives in the historic Fort Greene area of Brooklyn, New York where she’s working on her second novel, The Guthrie Test.

Moe: Looking back was there something in particular that helped you to decide to become a writer? 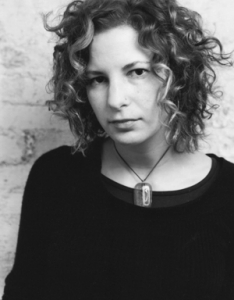 Amanda Stern: In some ways it was a process of elimination. I have been writing since I was a child. I was a playwright in high school and I wrote (bad) screenplays in college and then started writing poetry and short stories in my twenties, and yet, somehow I was always clamoring to have a different career. I wanted to be a filmmaker for a long time but I never made any films, I just wrote them. After a particularly difficult time in my life I found all I was doing was writing. I couldn’t seem to stop. I would stay up all night and write and I realized then, although it would be incredibly hard to survive, it was what I had to do.

Amanda Stern: Other books, other authors. Really good conversations with friends. Art. Trying to understand the way other people see the world.

Moe: On a typical writing day, how would you spend your time?

Amanda Stern: It depends and it also changes. I go through phases and right now I’m in a phase where I write at least three to four hours a day. When I’m at an artists’ colony (where I am writing this from) I can work as much as six or seven hours a day. A typical day is spent writing, reading and researching. I did have a long phase where I wasn’t working very hard at all, maybe an hour or so a day (and this was without having a full time job, so I really didn’t have an excuse). I find though, that when I go too long without writing, I get depressed.

Amanda Stern: I don’t think it has to do with length of time rather than it does quality of work. If I feel ready for notes then I’m ready to show it to people. The work dictates how I write it. Sometimes I revise as I go, other times I plow through and revise later. It all depends on the style and voice of the work. Right now I’m plowing through and will revise later.

Moe: When you have your idea and sit down to write is any thought given to the genre and type of readers you’ll have?

Amanda Stern: I write freely. I have tried, actually, to plan in advance and it just doesn’t work very well for me. I find if I know what’s going to happen, there’s nothing for me to discover and that’s the very reason I write. Martha Graham said “If I knew what it meant, I wouldn’t have danced it.” And I feel very much the same way.

Amanda Stern: If I need to do any research at all I do it online for basic things, and the library for more detailed information. I haven’t had to go visit the places I write about because I normally write about people inhabiting places I’ve already been.

Moe: How much of yourself and the people you know manifest into your characters?

Amanda Stern: Some of my characters come from the same place imagination comes from and other characters are just me. Most of my characters are aspects of me, but the people I know or have known are definitely manifested in my work. I’m not quite sure where the line is drawn. I feel a person is free to write about their experiences, about anything that has affected them deeply (or conversely, hasn’t affected them at all). It can get tricky though to write about your own experiences without implicating those who might have shared it with you. The key is, I think, to make certain it’s your story you’re telling and not theirs.

Moe: Writers often go on about writer’s block. Do you ever suffer from it and what measures do you take to get past it?

Amanda Stern: I don’t really believe in writer’s block. When I can’t write it’s because at the root of it, I just don’t want to. On those days, when I feel I can’t, I have to force myself, as if it’s exercise, because essentially, that’s what it is. Sometimes I’ll read which always gets me enthusiastic or other days I’ll use some time to think or talk things through with a friend. It’s really just a motor and you need to get it started in whatever way you can. Some days though, it’s really okay to just not write.

Moe: When someone reads one of your books for the first time, what do you hope they gain, feel or experience?

Amanda Stern: I hope they feel and have an experience. I could never say what it is I’d want them to feel, since reading is so personal and what you take from books can be so subjective, but ultimately, I hope I was successful in transferring my felt experiences and the way I see the world to the words I chose to describe them.

Amanda Stern: In my case, it was very helpful and important for me to be involved in the process of publication and promotion. I also learned how to talk about my book without devolving into a monologue comprised of “I don’t knows.” Also, in order to really champion my book, it was helpful for me to see my novel in the third person and not in the first.

Moe: What is your current release about? Where did you get the idea and how did you let the idea evolve?

Amanda Stern: The Long Haul is about an alcoholic, his co-dependent girlfriend and all the consciously bad decisions they make. It’s based on an unhealthy relationship I had that I stayed in far too long (years too long). In that sense it’s an autobiographical novel, yet plot-wise, it’s completely fictional. I was, and still am, interested in the insidiousness of addiction and why people stay in relationships long after they should leave; why I stayed. Letting it evolve was just a matter of listening to what I wanted to say, what I had to say and then dropping the characters into situations that illustrated their inevitable corrosion. There were times I couldn’t stop writing and I would stay up all night getting everything out until the sun came up, the diner opened, and I could get my coffee. I started the book a year or so after the break-up and it took me nine months to write – an entire gestation period.

Amanda Stern: Fiction mainly. I’m pretty influenced by style. I’m in the middle of a few books right now. I am nearly done with Cloud Atlas by David Mitchell and I’ve been reading some Katherine Anne Porter. I also have The One Star Jew by David Evanier, which I’ve begun and think is excellent. And I just finished reading a friend’s book, Ticknor, by Sheila Heti.

Amanda Stern: I like having good conversations. I have great conversations with my friends and my roommate. I go to dinners or drinks with people, see films. I’m in quite a heavy reading phase, so I’ve been reading a lot now. And quite often, I just make things. I like to take apart clothes and reconstruct them or make new things out of old things. I recycle things I don’t want to throw out into paintings or clothing. I also play guitar in a non-existent band.

Moe: New writers are always trying to gleam advice from those with more experience. What suggestions do you have for new writers?

Amanda Stern: Read. Write. Rewrite. Rewrite again. And remember, not everyone is going to like your work, so don’t get dissuaded by rejections. Keep sending your work out.

Amanda Stern: Based on where I was headed, I’d probably be working in film, but if this is based merely on fantasy, then I’d like to be a visual artist.