Mr. Darcy, from Jane Austen’s Pride & Prejudice, continues to be an icon for many readers and writers but most only know him from the perspective of Elizabeth Bennet. Wouldn’t it be nice to know Mr. Darcy’s point-of-view? Janet Aylmer, a long time Jane Austen enthusiast didn’t stop at wondering. She penned Darcy’s Story in the dashing Fitzwilliam’s perspective following the same events from Pride & Prejudice. Janet, who has been writing for own pleasure for ten years, also wrote –In the Footsteps of Jane Austen; Through Bath to Widcombe and Lyncombe. It’s amazing she has time for anything with four children and a spouse to occupy her days in Bath, England. I hope you enjoy getting to know about this author’s writing life.

Moe: Looking back was there something in particular that helped you to decide to become a writer? Were you a good writer as a child? 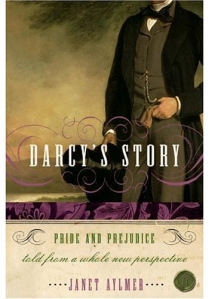 Janet Aylmer: I was thought at school to be good at English Language and English Literature, and have never found writing difficult. I have a law degree and a PhD, as well as two professional qualifications, so am very experienced in essay writing and assimilating large quantities of information. When I was working, I did a great deal of written work dealing with large amounts of detailed information and condensing that into concise and easy to follow reports.

Janet Aylmer: Telling a story and/or explaining a subject competently that other people may need or want to know about.

Moe: Every writer has a method that works for them. Most of them vary like the wind while some seem to follow a pattern similar to other writers. On a typical writing day, how would you spend your time?

Janet Aylmer: Two or three concentrated hours a day are the best method for me. I skim what I have most recently written, before continuing with my task.

Janet Aylmer: Three months would be a reasonable estimate. I do not revise a great deal.

Moe: When you have your idea and sit down to write is any thought given to the genre and type of readers you’ll have?

Janet Aylmer: Yes, it seems a courtesy to a potential audience/readership to avoid arrogance and make a book accessible and enjoyable.

Janet Aylmer: I plan generally, but then let the story/theme develop from there.

Moe: What kind of research do you do before and during a new book?

Janet Aylmer: I read thoroughly about people and places that are relevant, and keep careful notes where appropriate.

Janet Aylmer: I doubt that there are many writers whose work is not partly influenced by their own personality and interests. In the case of Darcy’s Story, it was a constraint not to change Jane Austen’s theme and outcome, but it would have been quite wrong to “compete” with her by putting different words into characters’ mouths for scenes which she had already described from the heroine’s point of view.

Moe: Writers often go on about writer’s block. Do you ever suffer from it and what measures do you take to get past it?

Janet Aylmer: No, not really. I suppose that is because for so many years I needed to write to “time deadlines” for my job, and therefore could not indulge the luxury of having writers’ block. Having said that, I have always sought to give myself some spare time at the end of a task, to give myself adequate time to reflect/review.

Moe: When someone reads one of your books for the first time, what do you hope they gain, feel or experience?

Janet Aylmer: An extra dimension on a subject that may already interest/intrigue them, and hopefully pleasure in having read the book.

Janet Aylmer: 1. Gratitude that so many people have enjoyed my books and value them – with readers from more than 40 countries around the world in the case of Darcy’s Story.
2. Not to worry too much that some people seem to want a different story/more sex/more length/less length etc. – everyone has different expectations and all are entitled to their opinions, good or bad.
3. Pleasure that something I enjoyed doing (writing the books) has continued to interest people – for more than 10 years (Darcy’s Story was first published in the UK in 1996).

Moe: How do you handle fan mail?

Janet Aylmer: I always write back personally to everyone who writes to me. The first “fan” letter that I ever received in 1996 was from an older lady from Sheffield in England, who wrote two full sides of paper, starting with the words “Darcy’s Story is an absolutely wonderful, thoughtful book; what an inspiration it was to write this story.” I also had a very interesting correspondence with a lady from Finland, who wrote the most wonderful English in “a Jane Austen style”, and yet could not get any of her own books published.

Moe: What’s your latest book about? Where did you get the idea and how did you let the idea evolve?

Janet Aylmer: My latest (factual) book was inspired by a walk that Jane Austen took with a friend in 1801 when she was (unwillingly) house hunting in Bath with her mother after her father retired. She passed through the valley where I live, and I decided that it would be interesting to write what she would have seen in Bath at that time, and what changes there have been since.

Janet Aylmer: I am very fond of Georgette Heyer’s novels, especially Frederica. I should like to emulate her by writing enjoyable novels with interesting characters and a touch of humour, as she did so often. I also enjoy history books, and books about how people can analyze their own thoughts and actions, and have a more enjoyable life as a result.

Janet Aylmer: Eat well in good restaurants, when I can afford it. Travel, especially in France. And enjoy the company of my family and friends.

Moe: New writers are always trying to gleam advice from those with more experience. What suggestions do you have for new writers?

Janet Aylmer: They must first of all choose – is the book to be one other people might want to read, or is it to be one they really want to write? Or can they write a book that combines these two very different aspects. There is no need to compromise your principles if you don’t want to do so. But writing is a solitary business, and I find a lot of self-discipline is needed. It is great to see one’s own book in print, and even better to know people enjoy reading it. So if you want to get your book into print, try to write something that others might want to read – test out your ideas on friends and family, and be prepared to make some modifications and changes if necessary.

My interview with Janet Aylmer was originally published 9/23/2006 at Literary Fiction, BellaOnline.

Test your knowledge of Jane Austen.