We are soldiers. Soldiers die. Even the most careful, even the bravest, the best. We die. 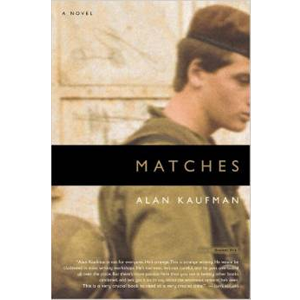 This is Alan Kaufman’s first novel. His previous publications include a memoir (Jew Boy), a poetry book and a few anthologies. Kaufman admits to being a “binational, Israeli and American.” As an Israeli he did time in the Israeli army or more properly Israel Defence Forces, giving him the experience necessary to draw on for this glimpse into a soldier’s life.

The title, Matches, is a nickname the officers gave the soldiers, “one-strike flames that burned up and died.” It is narrated from the perspective of Nathan Falk. An American Jew, who feels alienated at home in New York, has chosen to fight along his Jewish comrades in the Israeli army. Living on Time cigarettes, French fries and mud coffee he leads two lives, the one he has in Gaza and the one he has in Jerusalem. Were it not for the constant reminders from fellow soldiers that he is a Yankee he’d probably forget.

In Gaza, no one likes the Israeli army or its soldiers. Everyone they come across glares at them with “an undisguised look of hatred.” When he is on leave in Jerusalem he spends his time in bed with another man’s wife, a beautiful red-head named Maya, an artist with psychological problems Nate isn’t equipped to handle. Some of them brought on by his need to control and withhold despite saying “she was all that I care for”.

A View Outside the Usual Propaganda

What I liked about this book was the view it provided outside the usual media propaganda. It looks into the culture of Israel from two perspectives. One, although briefly, from the somewhat safe stronghold of Jerusalem and the other from the frontline of Gaza. It was a difficult read on many levels especially since my reading seemed to coincide with Israel’s recent turmoil but it did help me to understand more about what is going on; although I might not always accept it.

What ruined it for me were the in-depth side stories about a man defecating in the street; a sea of rotting horses, camels and goats; cutting off the ears of a dog and feeding it to him; and the horse that fell on a land mine. By the time I finished it I was just happy it was over. Some may think I’m losing the point of the story but I mention this only for those who would not want to read such content (in detail) which in this instance is more offensive than the rest of the story.

It dates itself with some of the language, like “Jerry Bruckheimer fireball”. There’s no real sense of a conclusion by the end. Nathan is still a soldier; the fighting continues and people keep dying on both sides. Nathan hasn’t learned anything since the beginning of the book; he just keeps on keeping on with no real purpose other than being a soldier.

What I would have liked to have seen is an appendage or two; like a mini weapons diagram to reference the numerous weapons mentioned throughout for those with no frame of reference. A map of the region would also have been helpful.

Matches is not high on my list of recommendations but if you’re curious about the life of one Israel soldier from the perspective of someone who has lived on both sides this may whet your appetite for more. If you have any sensitivity to animals being hurt, skip it.

This book review was published at Literary Fiction, BellaOnline on 11/17/2006.