In 2007 Doris Lessing won the well deserved Nobel Prize for Literature. The Nobel Prize doesn’t look at one piece of fiction but a life’s work and its affect on society. The eighty-nine year old (October 22, 1919) woman has dedicated her life to writing literature. It’s obvious from her interviews that her love of the spoken word is genuine and is not all about the pocket book. 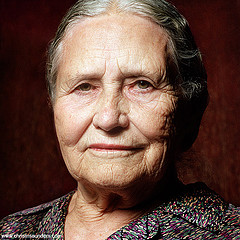 Doris Lessing, who lives in Britain, is a multi-faceted writer who has incorporated feminism, politics, science fiction, non-fiction, and poetry into her writing. Having such an array of interests is probably what has helped keep it fresh over the last eighty years. She has definitely been a prolific writer having produced seventeen novels, two poetry collections, two cat books, seventeen short story collections, two series and a few operas. She’s been described as having “no-nonsense language and observations” which can have an appeal to almost any reader. She wrote a few novels under the pseudonym Jane Somers. Doris Lessing is probably best known for her novel The Golden Notebook which was published in 1962.

Here is a listing of her literary books in chronological order:

Lessing, at eighty-nine, is an inspiration to readers and writers worldwide. And of course she continues to write when she finds the time.

Many of Doris Lessing’s books are available from Amazon.com including her most recent, Alfred and Emily.

This piece was originally posted on 11/5/2008 at Literary Fiction, BellaOnline.