Beloved for almost two hundred years, there doesn’t seem to be an end in sight for the afterlife of this classic novelist. New editions of her literary works are being released every year gaining new fans and delighting die-hards. 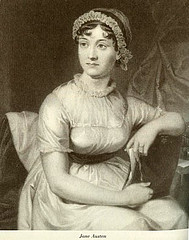 Jane Austen was born December 16, 1775 in Hampshire, England. She was born into an educated family with some grounding in society because her father was a priest. She grew up in a household of seven siblings (George, Edward, Henry, Cassandra, and Frank) all of whom were encouraged to develop a hardiness for reading. Her childhood was divided between the rectory and boarding school. Like most women of her time writing was encouraged in the form of journaling and letters but she took it one step further and began to write stories in her early teens as gifts for family members. With their encouragement she began her profession as a writer creating novels filled with deception, love, acceptance, and of course wit.

Jane Austen published four novels in her lifetime. Two were published after her death by her brother. The novels include: Sense and Sensibility (1811), Pride and Prejudice (1813), Mansfield Park (1814), Emma (1815), Northanger Abbey (1817), and Persuasion (1817). Her novels were published anonymously. All of her novels have been developed into screenplays for television and some for movies. The most loved tends to be Pride and Prejudice both in print and on the screen.

Jane Austen died at the age of forty-one (July 18, 1817) from what is now surmised to be Addison’s disease. Her sister Cassandra was by her side. Jane had never married. Her body is interred at Winchester Cathedral in Hampshire, England.

During Jane Austen’s life she witnessed some success from her novels but she never could have imagined the longevity and eventual cult following that exists today. She is readily studied by scholars in colleges and universities while the general public continues to scrumptiously devour her Regency works.

Test your knowledge of Jane Austen.

This piece was initially published 4/29/2009 at Literary Fiction, BellaOnline.