Its official name is the Miami Book Fair International and it is one of the biggest highlights in November (this year it runs from the 8th to the 15th) for the Miami, Florida area drawing in fine authors, bookies, bookie wannabes and aspiring authors for indoor and outdoor events. 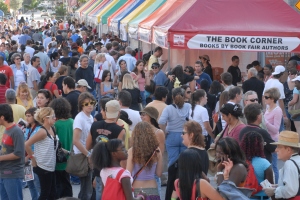 The Miami Book Fair is one of the longest running book fairs in the United States. Participants will be celebrating its 26th anniversary this year. Due to the lagging economy by all standards, the organizers have had to make adjustments to assure a productive event by cutting some programs and raising the fees or charging a fee for others. Regardless it is still an affordable way to spend the week for what is considered the “nation’s finest and largest literary gathering”

The fair is hosted by the Florida Center for the Literary Arts at Miami Dade College at the college’s Wolfson Campus, 300 NE 2nd Avenue, in downtown Miami. It is reasonably priced: the street fair is $8 ($5 for seniors, free for those 18 and under) — Friday’s street fair is free to all. Throughout the week there will be author readings and book signings, the Evening With series, the Ibero-American Authors program, the street fair, children’s alley and more.

Miami is too far away for me but one of the things I would love to attend is the Evening With series where attendees can pay an additional $10 to spend an evening with authors as they discuss their books. On the board for the week is:

Over the coming weeks leading up to the fair I hope to have more on participating authors.

You can find out the complete details at the Miami Book Fair’s official website.

This piece was first posted on 9/30/2009 at Literary Fiction, BellaOnline.