Hide Search
You are here: Home / Recipes / Fried (not) Pickles

“That’s the best pickle I ever heard.” ~ Vlasic

This is another recipe I would never have known about were it not for the wonderful world of Pinterest. Last year a friend of mine took me out for deep fried pickles at a local restaurant and they were awesome but I imagine if you coat any food in bread and deep fry it would probably be awesome. When I came across a “fried pickles” recipe that did not actually include frying I knew I had to try it. The original recipe comes from joshandkinze.blogspot.ca but as I write this I see they have since limited the view of their blog to invitation only or else I would link directly to it.

I made a few changes to the original recipe because I did not have access to some of the ingredients. For instance their recipe called for 1 jar of Claussen thick sliced dill pickles and Cajun seasoning.

I cooked my pickles in an Oster fan bake toaster oven which has a broil setting.

When preparing the pickles I wiped them dry with a paper towel to reduce excess moisture. I cut 6 pickles into 24 pieces and found that was more than enough for two people (we had leftovers for next day). 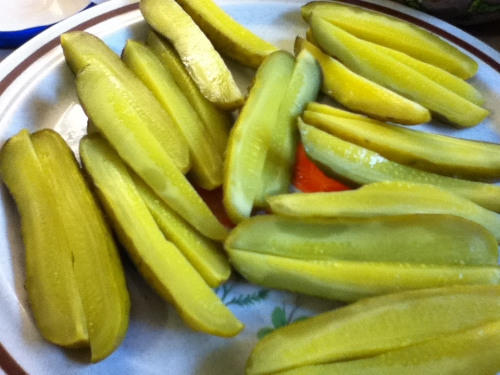 In a bowl large enough to fit the pickles length and deep enough that I could whisk without making a mess I added the eggs and flour and whisked until smooth. I then added the Worcestershire sauce, hot sauce, garlic powder, salt and pepper. It makes an interesting looking coating. 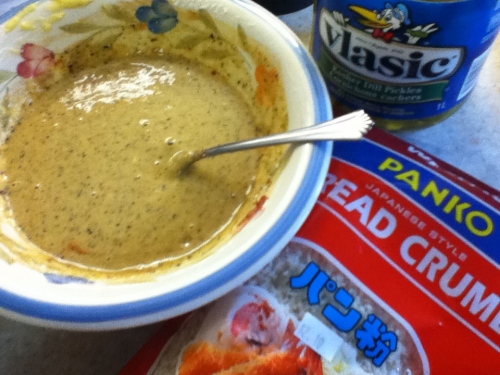 I put the Panko bread crumbs in a slightly bigger bowl so it would accommodate my hand moving around. Panko crumbs are necessary to make this recipe. Do not use regular bread crumbs — Panko crumbs are a Japanese style crumb with a totally different texture and weight than traditional bread crumbs. The first time I tried this recipe I could not find Panko in the grocery store, not even in the international isle. I had to go to an international food store and it only cost a few bucks for a box. Since then Panko seems to be becoming more popular because I have found it in both grocery stores I frequent both in the regular crumb isle and the international isle. 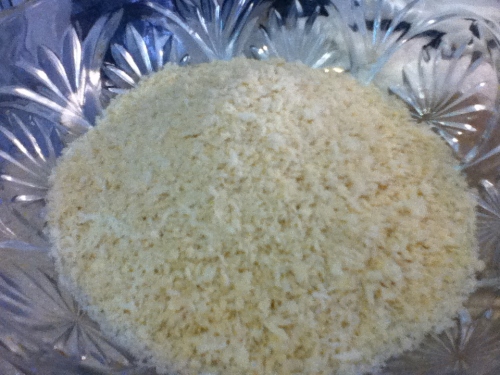 As you may have guessed the pickles get dipped one at a time into the egg mixture (I use tongs). Then very carefully rolled into the Panko crumbs (I use my fingers) so the egg mixture does not come off. It takes a few tries to get the right layer of egg and crumbs. 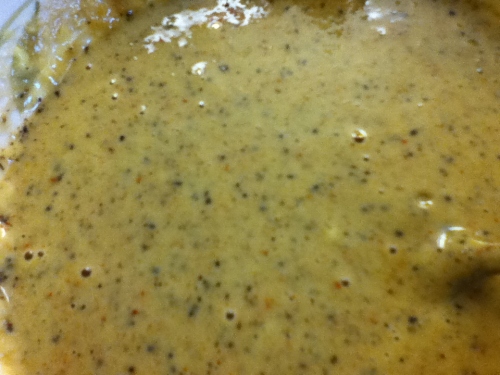 Instead of cooking on a sheet of parchment I used the rack that came with the cooking tray for the toaster oven (the parchment paper you see is underneath to catch droppings). This allowed me to bake the pickles without turning them. I did not want to fudge around turning them in case they fell apart. I baked them for 9 minutes under a preheated broiler. 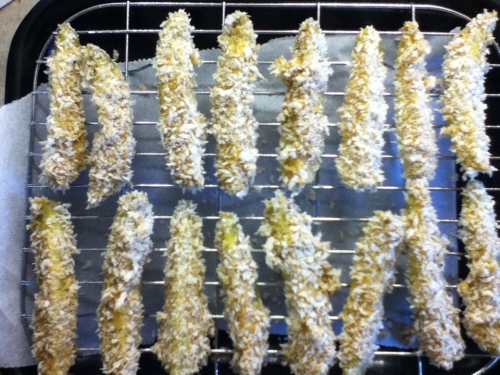 Because they were baked on a toaster oven tray it required two batches but I think they all would have fit on a regular cookie sheet for the oven. 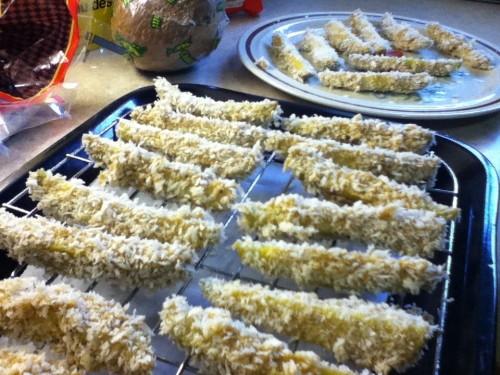 Fresh from the broiler: 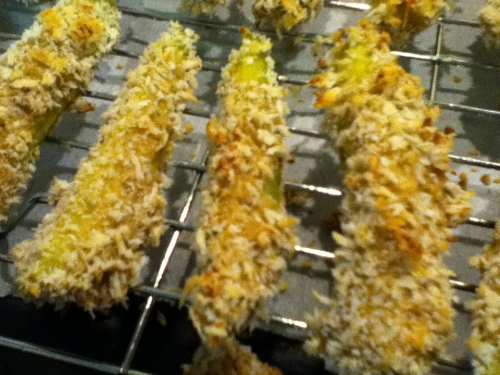 The original recipe also included a recipe for Cilantro Garlic Ranch dressing but I am not that much of a foodie and we went with a bottle of Kraft Ranch and did not know any better.

Jeff was definitely skeptical of the whole pickle thing from the get go. He is picky about his pickles thanks to his Gramma — the only one who knew how to make a really good dill pickle — unfortunately she is not around to satisfy his cravings anymore or to pass along a recipe.

We both enjoyed the pickles and while I would not dream of comparing them to the restaurant deep-fried ones they do come a close second and are even more appetizing knowing they are baked. A few weeks later I used the same process on zucchini sticks with equally tasty results (and a few weeks after that on chicken breasts). If you you try it let me know.