This past month Blue Dot Literary sent the latest book by Paul Batista, a “premier criminal trial lawyer”, to review. Extraordinary Rendition is a legal thriller centred around the issues of Homeland Security. 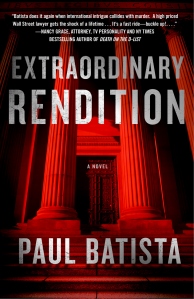 Bryon Johnson is a high-priced Manhattan lawyer who has been working in corporate law for thirty years and is a well-respected partner at SpencerBlake Law Firm. As a big-time corporate lawyer he has remained out of the television spotlight and therefore the public eye for all of his career; until now. One day he decides to take on a pro bono case for Ali Hussein (no one seems to know for sure if that is his real name), who was arrested nine years ago in Germany.

“He knows where the money is.”

Ali is an proficient accountant who lived and legally worked in New Jersey for a decade but was not a US citizen. The government believes he moved around millions of dollars for Al-Qaeda, was involved in arranging an attack on the USS Cole, as well as bombings at an African embassy. The government wants the important banking information stored in his head — he has never been formally indicted but he has been moved around, interrogated, tortured, and kept without due process because of something called the “anti-terrorism bill” which gives the powers-that-be the “option to decide when to indict and where to indict”. So basically all trial rights are out the door.

Bryon first meets his client in Miami for the first time. Bryon is the first lawyer, first person, outside of his captors who Ali has been allowed to talk to and he is only allowed ten minutes. His first task is getting Ali to trust him enough to want him as his lawyer obviously he does or else there would not be much of a story to continue with.

Bryon has been divorced for six year and has two sons. When it comes to socializing he participates in the firm’s basic requirements but is otherwise married to his work. Early on in the case he meets the beautiful Christina Rosario, an overly intelligent drop dead gorgeous summer intern who of course wants our dedicated lawyer. While he becomes a bit infatuated with her he maintains his sense of professionalism and does not pursue her until her internship is over and she has left the building so to speak. He then hires her on as his assistant and she immediately becomes a fixture/distraction/love in his life all too easily he realizes but he does not care.

There are many quotes from the Koran throughout the story as Ali gets Bryon to share passages with his “brother” and the Imam (lead worship at a mosque). But the focus definitely is not on the Koran as a religion but as a tool to communicate secret information which ultimately gets Bryon drawn further into the government’s investigations and deceptions. Now the government is ready to charge him with acts of terrorism (or worse) unless he helps them get vital information from his client. Bryon soon realizes he has entered into a situation that goes beyond any form of the law that he has experienced and will have to decide what side he is on if he wants to survive.

While the story between Bryon, Ali, and the legal system is interesting and entertaining, some of the plot twists, like the sexy assistant being a secret agent, were predictable way back in chapter four. There were numerous sexual interludes, if one could call them that, mostly just old men walking around nude and admiring how lucky they are to be with a gorgeous woman also walking around naked. Floating statements like, “He nailed her to her cross” after one of the sex scenes are distracting from the story and not as gripping as the main parts of the novel I wanted to read and ultimately annoying.

Batista is deft at crafting dialogue for unnerving interactions like interrogations as he is with amusing banter between two opposing lawyers and other members of court. The streets and buildings of New York are a welcome character weaved throughout the story. Overall it was an enjoyable fast paced novel that kept my attention.