This summer we developed a fruit fly problem. What is surprising is that it has taken this long, since we have been composting for years. We just seemed to hit the right amount of ripe bananas and compost to ignite a war between us and them.

When we noticed the first signs of the little critters flying around we ignored them. Big mistake. Don’t ignore them. One of the first thing we learned about fruit flies is that they produce like bunnies — in a shorter time span — about every seven days we could expect a new outbreak.

We started making a conscious effort in killing them. First I had a notepad that I used to swat them. I did pretty good with about ten flies in a session. Then all of a sudden it was like they learned from their dying comrades to get out of the way and I couldn’t hit one of them. Then I was putting a Ziploc bag near the bananas with a banana in it to catch them. This worked for about two Ziploc bags and I was only getting about six to eight at a time, hardly enough to account for wasting a bag or a banana. Finally I told Jeff, no more bananas or kitchen composter until we get this under control. We froze the bananas we had left (great for smoothies by the way) and cleaned out the kitchen compost collection container. It’s been about three weeks and we have seen a decrease in flies but they are still around and if they are still around… well hello bunnies.

I went to the Internet and found a forum with suggestions on how to kill fruit flies and the one method in particular that spoke to me was using cider vinegar in a glass with Saran Wrap on top with holes punched in the top to attract the flies. They crawl in but can’t crawl out. It seemed like a pretty inexpensive solution and the dead flies could just go down the drain.

I picked up a small bottle of cider vinegar the other day and put a glass by the banana area and by the compost area — just in case they are like butterflies and have the same flying route sense. I know, I know. Then I put one in the bathroom as that seemed to be a hot spot too.

Within two hours I had caught twenty flies in all three glasses. They were walking around so I swirled the glass to catch them in the fluid. My Karma is totally out the door. I got up this morning and there was a new hatch — each glass had ten to twenty flies. Eureka! It works! It really works. 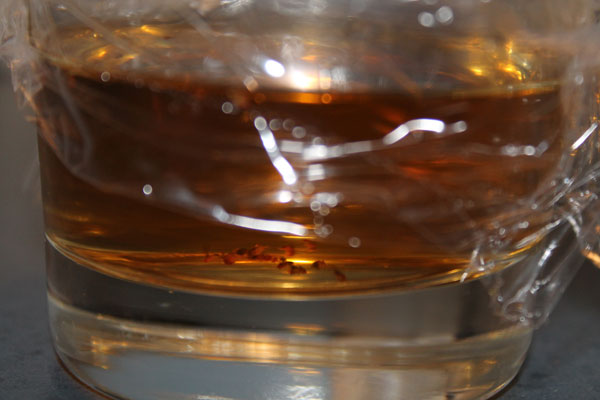 All day I have been circulating around the three spots and checking the glasses, giving them a swirl etc. I will change the glasses and solution tomorrow and add some fresh cider vinegar and Saran Wrap and wait. 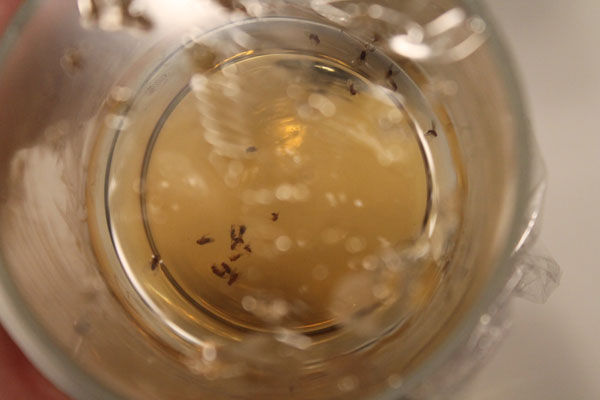 I am hoping to only have to do this for two more seven day cycles and in the mean time I am going to do a lot of surface cleaning to hopefully calm things down. It’s starting to get colder too so things will be in our favor. Fingers crossed.