Hide Search
You are here: Home / How To / NaNoWriMo Writing Sins

November is just around the corner. In the writers world, that means NaNoWriMo. Yep, National Novel Writing Month, when a bunch of crazy writers decide this is the month they are going to write the novel that has been languishing about in their brains or hard drives. This is the month that writers take on the marathon of writing challenges. This is also the month that every single one of those writers has to bench their self-editors. You cannot go back over the same sentence, paragraph, and scene again and again to get it just right. This writing challenge only works, the goal is only successful, if you let it all go and let yourself commit the NaNoWriMo writing sins. 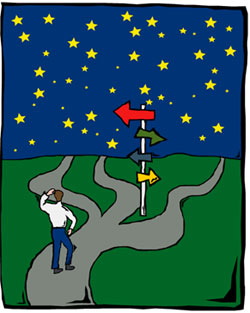 It was a dark and stormy night on the darkest of stormiest nights, and there would never be another night as dark and as stormy. Oh, cliches. They are cliches because they are so delicious. Whoever first wrote the dark and stormy night line surely had something going. The shiver of dread. The feeling of unknown. A delightful combination, but alas, one that has been used until it has become The Example of a cliche. But guess what, during NaNo, embrace the cliches.

Don’t know how to start that story out, start it out with a dark and stormy night. Instead of avoiding a cliche like the plague, take it by the tiger’s tail and beat it until it is deader than a door-nail. Like a kid in the candy store, every dog has its day, and that includes cliches. Don’t worry about those cliches, just don’t stop writing.

“You will not get away with this,” said the Hero.
“And how do you plan to stop me?” Asked the Evil One.

Love the archetype. You need an old crone, write in the old crone with warts and a black pointed hat. Need a wizard, make sure he has a long white beard and a gray robe. Want the mother figure, make her a fat Italian mamma. Use the archetypes. Will you have to go back and flesh them out, of course, but during the month of November, two-dimensional characters are your best friends. Use them. Abuse them.

My characters often go on tangents. I once wrote about a woman who I thought was a Catholic nun and before I could stop her she jumped out of a plane and contemplated having a one night stand with a motorcycle gang member.

I have no idea how it happened. She hijacked my story, and not for the good of the story. But sometimes characters roam. A little girl who just found out she has magical abilities and then goes for ice cream. Why? Because she wants ice cream apparently. This one is the hardest for me during the NaNo challenge because I like to be in control, and I do not like when my characters go off on tangents. However, becoming obsessive about your characters is not going to help.

They will likely wander back to your story and later you can cut that scene out. The thing is, roaming characters can sometimes lead to the best, most touching, and insightful scenes. But whether the tangent is good or not is something you can decide… once November is over.

Finally, the ending. It is November 30 and you are wrapping up. It is choppy. It is not quite right. That is all okay. Just finish it. Quickly perhaps. Skipping things perhaps. But put a ending to it because you will go back.

NaNo is a wonderful experience for the writers crazy enough to attempt it, and published works have come out of it. Apparently, Sara Gruen’s Water for Elephants came out of a NaNo challenge; however, what was published is probably not what the manuscript looked like at the end of her NaNo challenge.

So, once November is over, the challenge complete, take a break. Marathon runners get a day off for every mile they ran in their race; only fair that writers should get the same. But once rested, pull out your masterpiece. It will be rough, but with love, attention, and your sidelined editor back in the game, it will shine.