Influenster sent me a Sally Hansen Vox Box in early January featuring three polishes from their Complete Salon Manicure (CSM) line. If you follow me on Instagram or Twitter you know for the past year I’ve been kind of obsessed with nail polish and painting my nails. I even started a blog about it. So when the box of nail polish showed up on my door I was quite excited (although I was surprised to find it ill-packaged — one of the bottle caps had come undone and leaked). 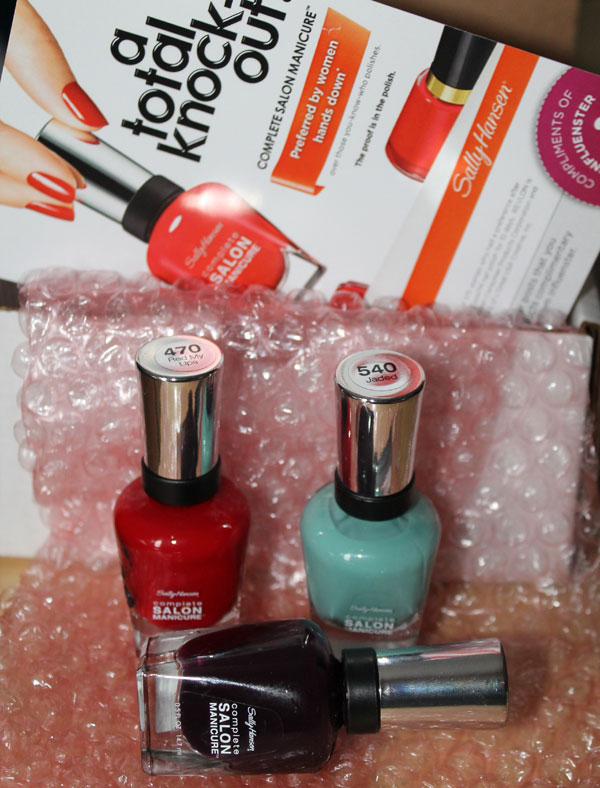 I find two coats are necessary with a possibility of a third depending on how well the first coats go on. In this case POTB needed two coats to get a complete opaque look while Jaded needed three and RML was pretty whether it was a sheer one or an opaque two coats. Let’s have a look at my nail polish swatches!

Pat on the Black

With Pat on the Black I had a very tiny chip the next day but I dabbed on some fresh polish, let it dry, then applied another thin coat and I couldn’t tell it was chipped. The mani was pretty good for four days (around day 3 I gave it a top coat of glitter) and by day five, because of my habits I took it off. I honestly don’t think I can leave the same polish on for ten days to test this out. I get too antsy with the color and want to change it. Even though there is a base coat in the CSM I applied one anyway because I am paranoid about color transference with dark colors but I didn’t apply a top coat. 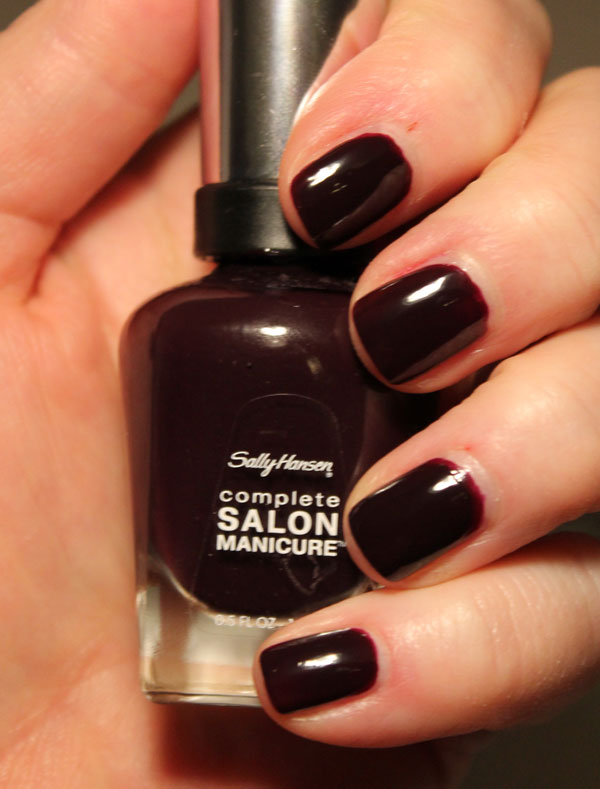 This color is up my alley. It is impossible to have too many blues in one’s nail polish cache as far as I am concerned. This polish looks like it would be opaque in the bottle but it is actually a sheer psuedo-jelly. I found it needed at least three coats to get a suitable color but the third coat did not apply as good as the first two. This polish was on for four days before I noticed some nail wear along the nail edge but no chipping. Like the Pat on the Black I used my own base coat but no top coat. 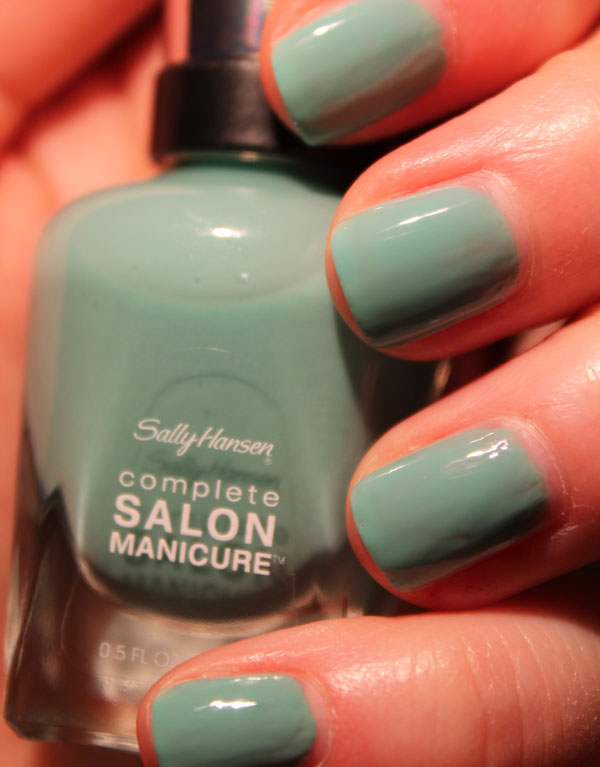 Oh, I was so itching to try this red. It went on amazing. It has a similar jelly-like quality that jaded has but didn’t require as many coats. The nail edge was transparent with one coat but it still looked amazing. Love, love, the color. I decided to live on the edge and not use a base coat and did not notice any staining when I removed it (bare in mind that I am a regular user of nail conditioner so my nails are not dry). Like the other two polishes I did not use a top coat at least for the first few days until I started noticing red marks on things and realized it was the red nail polish whenever my nails scuffed something like the inside of my new fridge when I was cleaning it. I put on a top coat and it quickly solved the problem. 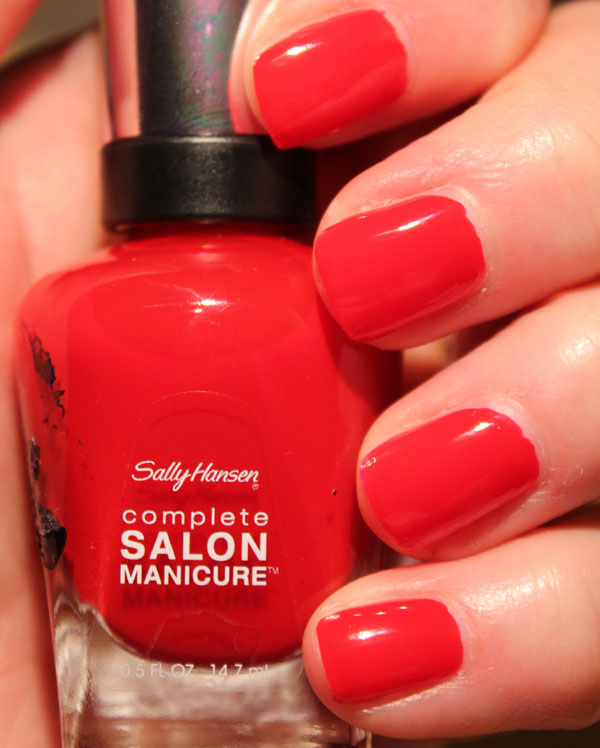 I have a few bottles of Complete Salon Manicure in my collection already and I would call it one of my favorites. My favorite feature besides the colors, is the large brush. I can almost paint my whole nail with one stroke. I also like how the polish does not get tacky as I am brushing them on but still manage to dry quickly once I am finished my manicure. I like the large bottle sizes and a past favorite of mine was the rubber neck on the cap but they have since replaced it with just plastic which is unfortunately because the rubber was really great for gripping if the lid was stuck but this new plastic band is not.

Overall I can get about four days of great color before I start noticing wear along the nail edge but on the bright side this was super easy to touch up with a thin coat, unlike an actual chip which tends to leave a bumpy edge. Sally Hansen’s Complete Salon Manicure is still one of my favorites.

Update: This weekend I decided to play with all three colors with a nail art that has become my favorite go to: 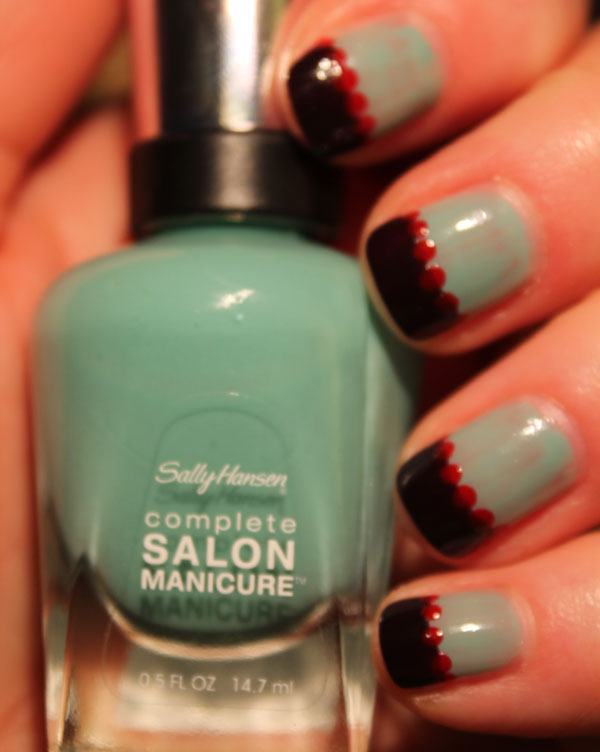 “I received these products complimentary from Influenster for testing purposes.”