I made this for my husband in 2010 (and he still has it today) but it can be easily used for a woman pirate. First up, buy a pair of pleather pants from the second hand store in your size or bigger. The bigger you get the more material you have to work with. I say pleather because it would be a waste to cut into leather and it’s cheaper. I found a pair of pleather pants for $13 and they were in excellent condition.

The red dash lines are cut lines. Before I started I had to cut out the thin material liner which was easy enough. A. on image at left — The pleather pants had a 2″ waist band and a side zipper that I cut out. B. and C. are additional cuts just above the knee and again about 6″ longer. D. is a cut line to remove the seams in crotch. 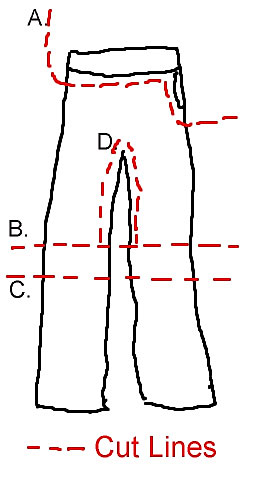 The material on the lower half of the pant makes up the buccaneers of the pirate costume (the boots). 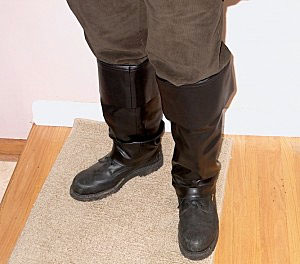 The small section between B and C makes the fold over at the knee. The small piece is turned inside out and placed a few inches within the top of the larger piece and hand stitched around. I used waxed floss because it slid in and out nicely and didn’t break easily. The stitches were large enough to hold pieces together. Nothing fancy as it won’t be visible anyway.

I cut the remaining large pieces of fabric in half up the crotch and opened them. One piece makes up the back of the vest and the other piece I cut into two pieces out to make the front part of the vest. I didn’t use a template, I just eyed it. The front pieces were cut into point which made the vest longer in front and short in back. Out of leftovers I cut long strips about half an inch wide and as long as I could make them. 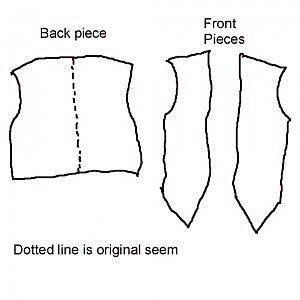 I poked holes in the shoulders where the front pieces would be attached and the side pieces where the front would connect with the back. I then threaded the long strips through the holes in a cross pattern as if lacing shoes and tied the two ends in long knots. The size of the vest can be adjusted by the ties.

This could be adapted for a woman: black skirt (short or long) or men’s baggy pants, white or red blouse, bandanna or sash on head, and wide belt at waist.