Hide Search
You are here: Home / Reviews / Under The Net — Book Review

Under the Net was Iris Murdoch’s first novel published in 1954 and is one of Time Magazine’s 100 best novels of all time. Much is made of Murdoch’s philosophy background and how she married it with her fiction writing. And while I do find this present it doesn’t make the story any more or less entertaining. The most common philosophical theme in this book is that of truth and lies in communication and how we are incapable of ever telling the complete truth.

James Donaghue (Jake) is a struggling British writer and book translator living in London with a girl named Magdalen (Madge), a typist and model. She kicks him out in an attempt to get him to commit. In the mean time she hooks up with a book maker, Samuel Starfield, who has his own agenda. 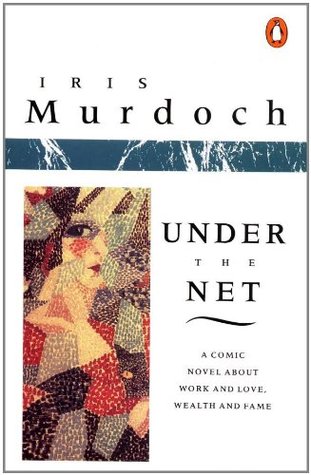 The main story follows Jake as he searches about town for an old acquaintance, Hugo Belfounder. According to Jake, Hugo “is the central theme of this book”. Jake first met Hugo years previously during a medical research project they both participated in (they were essentially guinea pigs). They shared a room, lively conversation and a mutual respect. Jake ended up writing a book (and publishing it) about Hugo’s ideas without telling him. He felt guilty about it and ditched his friend with no notice. Years later, Hugo suddenly returns to his thoughts and his social circle. All Jake wants to do is find Hugo and apologize for what he feels is a great grievance against him. Finding Hugo and a new place to live doesn’t come as easy as expected as Jake becomes easily distracted especially when he discovers an underlying story of deception; a planned double-cross involving his ex, her new beau and The Wooden Nightingale, the current manuscript Jake is translating.

Jake is an odd duck who’s always getting into these extraordinary situations (like stealing an acting dog, skinny dipping in the Thames or bringing down an entire movie set on a crowd of protesters) and managing to get out from under the net at the last moment. Jake is a bit paranoid (“I am sensitive to observation and often have this feeling not only in the presence of human beings but in that of small animals”). He’s afraid of planes, trains, crowds and losing his pants in public. One moment he’s living off the assets of other people and next he’s handing out his last bill to the bum on the corner who pan-handles. Perhaps it’s his weird behavior that makes him so likeable.

Throughout the escapades Jake has a few trusted allies who are loyal and interesting characters who could have carried their own novels. Specifically, Peter O’Finney (Finn) who spends a lot of time as Jake’s wing man. Jake describes Finn as a “humble and self-effacing person and so automatically takes second place” and a man who’s “more like his manager” than a friend. Jake has a dislike for many things, being alone is one of them and this is where Finn comes in handy. There’s also Mrs. Tinckham, the chain smoking bar owner whom he trusts to look after his things when he’s between places (which is often). She’s a cat lady and “has been very kind” to him and he never “forgets kindness”. He also regards her very highly because of her respect for others privacy. “I am devoted to Mrs. Tinckham,” he says which makes the reader want to trust her to.

Under the Net was Iris Murdoch’s first novel published in 1954 and is one of Time Magazine’s 100 best novels of all time. After numerous reviews and watching the movie Iris starring Kate Winslet I had great anticipation in reading it; half expecting shear writing brilliance.

I was really disappointed to find awkward passages of text like: “…that something had remained intact of that which there had formerly been between us; and it could not be but that the passage of time had somehow made this remnant more precious…” Strange similes like “the carpets were thick, and the work woodwork as clean as an apple.” Huh? I even found a blatant double cliché: “the ice was broken between us” and “it is possible to break the ice without burying the hatchet”.

Much is made of Murdoch’s philosophy background and how she married it and her fiction writing. And while I do find this present it doesn’t make the story any more or less entertaining. The most common philosophical theme in this book is that of truth and lies in communication and how we are incapable of ever telling the complete truth.

There is a lot of banter about what the title Under the Net refers to. Most think it has to do with Murdoch’s philosophy background specifically Austria philosopher Ludwig Wittgenstein. Thinking in simpler terms I think it has more to do with Jake’s escapades and how he nearly gets caught but manages to slip out from “under the net” at the last moment.

The term “under the net” appears in an excerpt that Jake shares from his published book, The Silencer, in a conversation between Tamarus and Annandine on the theory of why we do what we do. “All theorizing is flight. We must be ruled by the situation itself and this is unutterably particular. Indeed it is something to which we can never get close enough, however hard we may try as it were to crawl under the net.”

The momentum doesn’t pick up until half way through the book. One of the best scenes, for me, was when Jake gets drunk and argues about political and social mores with a new friend, Lefty, who he met in a pub while out looking for Hugo. Then in chapter fourteen he leads a rescue for the Marvelous Mister Mars being held captive in the evil Samuel’s pad. This is actually when the book starts to get good. Jake falls in love with Mars the acting dog who becomes his one true companion when everyone else leaves him. I kept reading about how laugh-out-loud funny this book was but didn’t actually make a peep until Mars the acting dog was asked to feign death so Jake could skirt the police. In the end, Jake, who is taken care of by everyone else finally finds himself taking care of Mars.

Overall, the book was a big disappointment for me but I haven’t sworn off Murdoch yet. It is after all only her first book. There are twenty-five more to go. I’m hoping The Bell will be a better experience.

***
Topic Links
* Add Under the Net to Your Library

This review of Iris Murdoch’s book was first posted on 5/24/2008 at Literary Fiction, BellaOnline.