We picked up the Jayco White Hawk Travel Trailer from Lens RV in Brighton on a Friday. Their service technician took us through a walk-a-round and a walk-thru of the trailer before we hopped in and headed down the road. 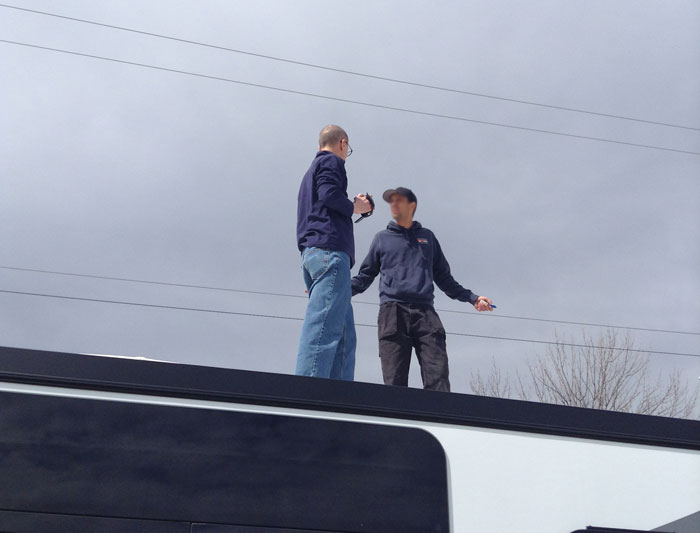 Here is a view Maggie and Glenn just before we left the lot. 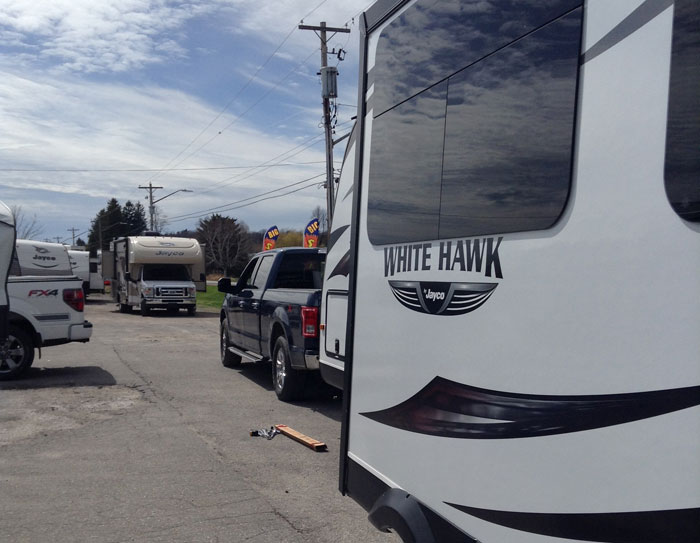 I’m not sure how other people do it but we decided driving all the way home (33 minutes away) the first time was just too much stress. A few weeks before we were scheduled to pick up the trailer, I booked a pull-thru camping spot at the Brighton KOA a few minutes away from the dealer.

We actually took a drive into the campground a few weeks before they opened for the season. The gate was open so we took the chance. There were a few seasonal sites (trailers that stay the whole season) in place but it was otherwise quiet camperwise. The owners however were busy getting ready for the season which officially opened April 29th. We had the opportunity to meet Jason who was incredibly kind, supportive, and welcoming even though we were essentially strangers trespassing. He told us about the renovations they were working on and how they planned some changes for the coming seasons. Talking with him ahead of time really helped us cement our choice of staying there first.

When I called to book a site a few weeks later, I talked to his wife Jackie who was also equally kind and gracious. She seemed very excited for us joining the RV world; and offered their help, should we need it, setting things up.

Towing for the First Time

Pulling out of Len’s parking lot was a surreal experience. I had a goofy grin on my face and Jeff was trying to smile while he white knuckled the steering wheel as he pulled the truck and trailer out onto the highway. Traffic seemed to be in our favour. We were almost completely on the go when there was a loud metal on metal noise that jolted both of us. We could hear Elida, calling out behind us, “It’s OK, it’s supposed to do that!” or something along those lines. It was anything but OK to both of us but we continued down the highway. Wryly I said, “I guess that is a new sound we have to get used to.” One of many new sounds — most of which sound really bad and unnatural.

Our first drive took about 25 to 30 minutes mainly because we decided NOT to take the shortest route back through Brighton to the camp site (that would have been quicker). We both did not want to go through town and manoeuvre a tight corner. But this meant a slight detour and then driving on the 401. Jeff was incredibly nervous but he was a trooper and did an excellent job of manoeuvring the truck and trailer. I’m not saying there were not a few mini panic attacks along the way to destination.

Noises, Pick-up, and Shimmy, Oh My!

Having never pulled a trailer before there are many, many new noises. Those fancy weight distribution hitches can and do make all kinds of clunks, groans and creaks. Then there are the chains, and we must not forget the length. We thought the truck was long — adding a 32 foot trailer out the back and then turning corners, especially to the right means swinging wide to prevent jumping a curb.

Then there is the pick-up. Not the truck, but acceleration. Dragging a house behind you changes the way the truck speeds up and slows down. The 3.5 EcoBoost does a very good job of pulling, but in Tow/Haul mode it does rev higher and also uses engine braking (a little shocking the first time).

And finally there is the shimmy. Having the big monster on the back means the truck experiences a little bounce and “jiggle”. It is not sway as the trailer is following nicely behind, but there is a little “extra” body motion like a short teetertotter ride over and over; especially if the road is uneven. Pack the Dramamine!

In hindsight, it was probably a good choice to book the nearby campground instead of driving a longer distance under all that stress.


Our first trip was over and we arrived to our first camping destination in one piece! Now it is time to get used to our new home on wheels. 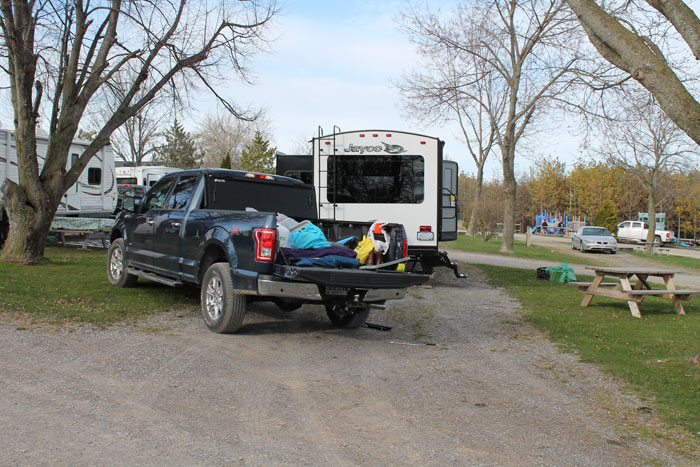 Went to check out the city lights from a distance.

We now have a table!