Are we camping or are RVing? I really don’t feel like we are camping because we aren’t sleeping on the ground in a tent. And I don’t feel like we are RVing because it isn’t a motorhome. And travel-trailering just seems too cumbersome but since it’s a campground I guess I will go with camping. Or maybe Rving. You definitely need all this stuff if you are Rving (Honestly, this is about half. I swear I tried to keep it to necessities.) 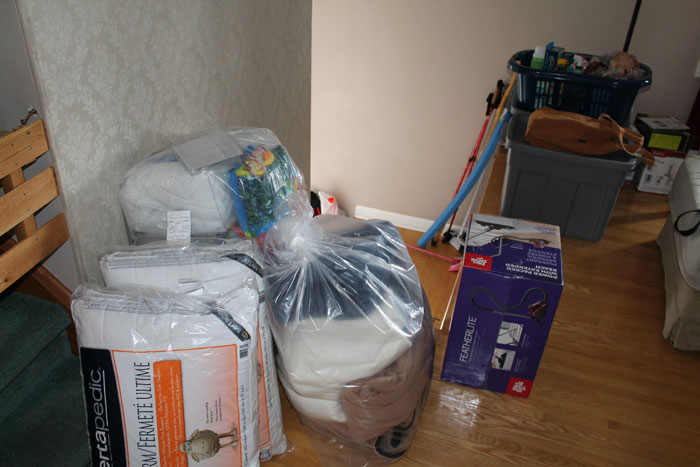 We have known about KOA campgrounds for decades but have never stayed at one. KOA Brighton was our first experience with pulling our trailer into a campground, checking in, parking, stabilising etc.

We got a little scared when we had to drive down past the campsites to the camp store to check in as the road narrowed to one lane on a slight curved decline. We were momentarily confused wondering how we would get out but then realized it was a one way that would loop around. 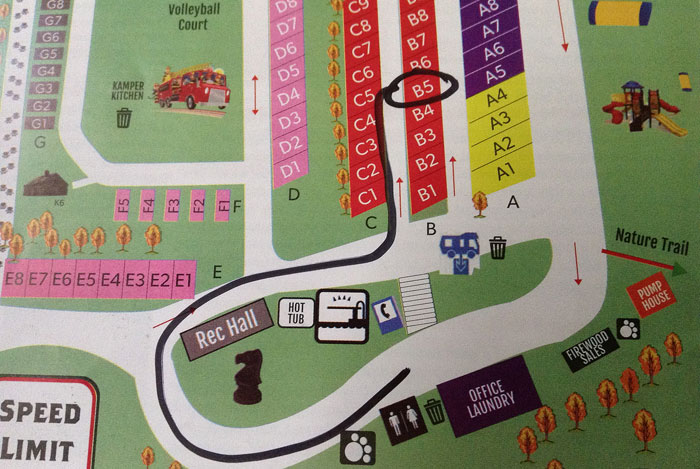 Jason was inside in work gear with his brother and I chatted with them for a few minutes while Jeff finished the hassle-free check-in process with Jackie. We had no idea at the time it was their opening weekend.

A season promotion for Brighton KOA is the “Collect a Ducky” contest. For every weekend you stay you get a different themed ducky. At the end of the season, the campers with the most duckies when a prize. Here is our first ducky. 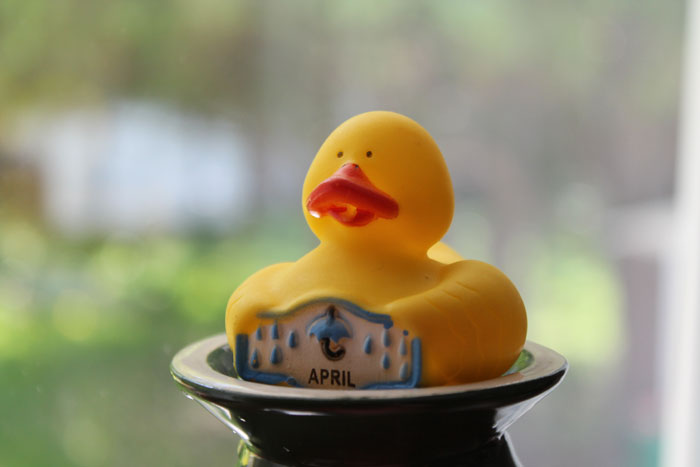 They have other family oriented weekend events throughout the season too.

After registering, we hopped back into our truck and a summer intern escorted us via golf cart to our camp site — talk about making the process stress free!!

As you can see from the campground map above, our site was B5 and was centrally located. The campsite was well maintained and clean. It was a pull-thru so Jeff wouldn’t have to worry about backing up. Look how relaxed he is now that the trailer is parked. 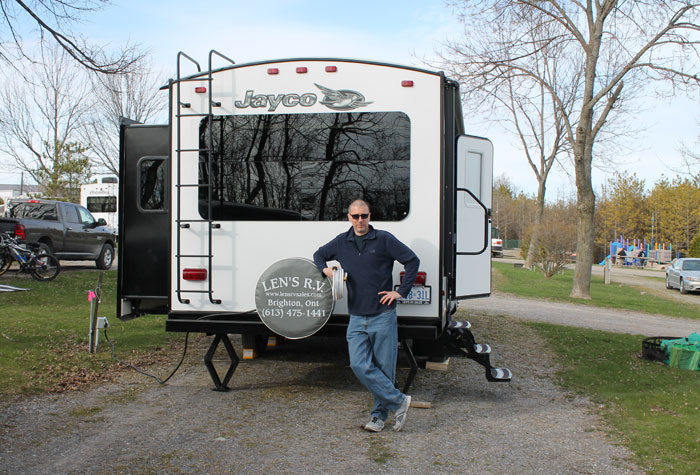 The gravel strip was surrounded by green on both sides. On the front was our camping area which included a picnic table and a fire pit. F I R E! 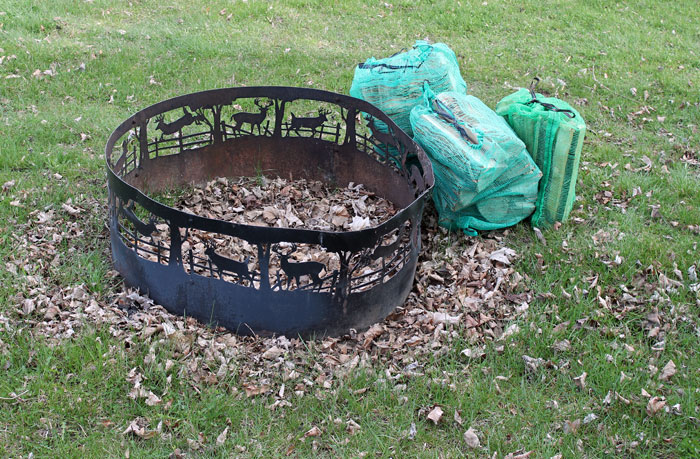 On the opposite side our neighbours. We overlooked a road and could see the owner’s home, and the Big Bouncer (a giant rubber bubble that kids jump on and apparently LOVE; seriously, they love this thing).

Washrooms and showers were a few minutes walk. There is a little noise from the highway but it’s more of a background drone than a nuisance. There is a nice treeline view that surrounds the highway and I imagine in the fall it is quite lovely.

The only negatives were no hot water in the shower area (for mens or ladies) and the wi-fi was pretty much nonexistent (Does any campground have good wi-fi? I think not.) I checked at numerous times and it was painful to download basic email. I eventually used Jeff’s phone. Overall we thought it was a great location. It was lovely and we plan to return.

Setting Up and Supper

We started to set up. When I see we, I mean Jeff. He had make sure the trailer was level. It wasn’t. We did a little back and forth on some wood planks he brought along and were mostly level enough so he could put down the jack and stabilisers. During this process a couple young men in a truck stopped and offered us some fire wood. Jeff purchased two bags and some kindling — which we now know is probably too much for a weekend when it’s just the two of us.

It was late afternoon when we pulled in so supper was a high priority. The outside stove was set on the picnic table and Jeff cooked some delicious burgers (see what else we ate this weekend).

I added salad, carrot sticks, and grapes to the mix which he was very happy about. 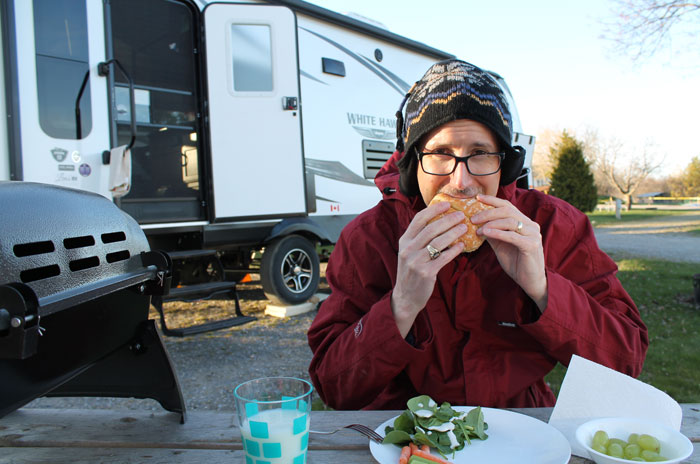 As you can see it was a bit cold for the last day in April. We didn’t mind though. It made it comfortable for what was to come. 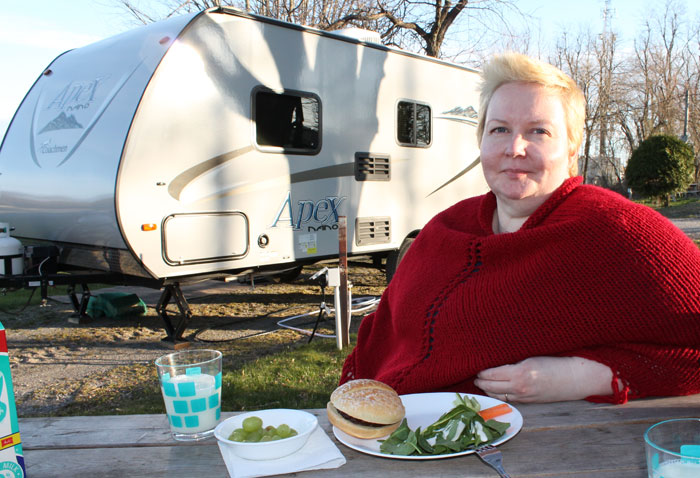 That’s the neighbour’s camper, not ours.

I was a bit obsessed. I can admit it. The trailer was brand spanking new but in my opinion it was filthy. It hadn’t been cleaned since it left the factory. There was dust all over the walls, curtains, cupboards etc. I washed down and vacuumed everything but it’s still not as clean as I would like. I know, I know, it’s camping. Camping is not a clean activity. Ha! 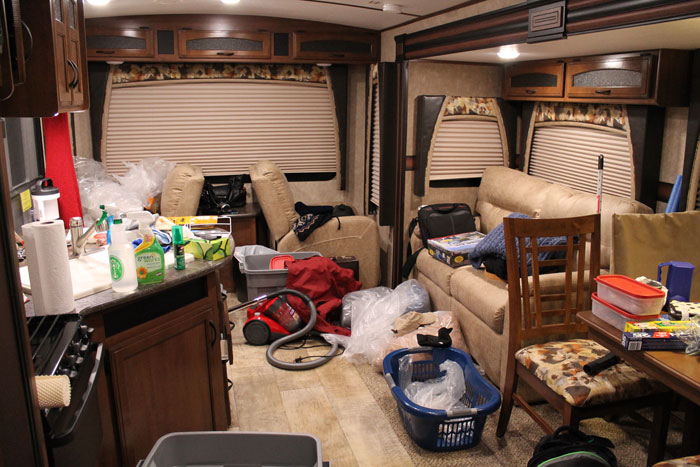 Because of the cleaning process and organizing we really didn’t get to explore the campground as much was we wanted. There is a nature trail and a dog trail we both want to check out — maybe next time.

We did get to build a fire. Well, I built it. Jeff got to watch me build it. 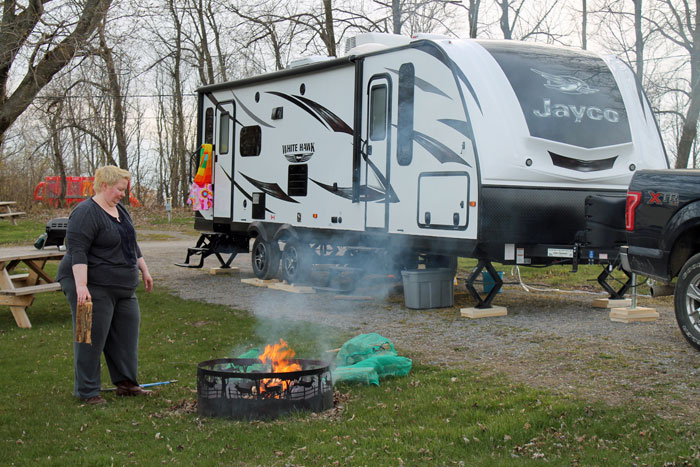 And it was pretty awesome if I do say so myself. Having the kindling already cut was certainly helpful but I probably wouldn’t get it again. Who needs kindling?! Just call me firestarter. 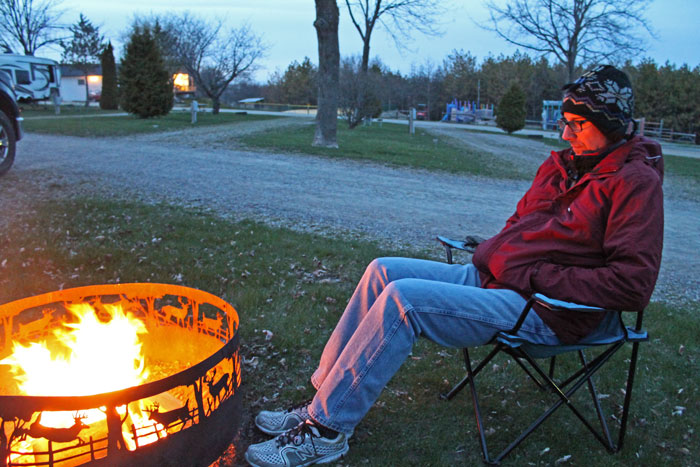 It was a long day. We were definitely tempted to snooze by the fire. Oooooo, fire…. 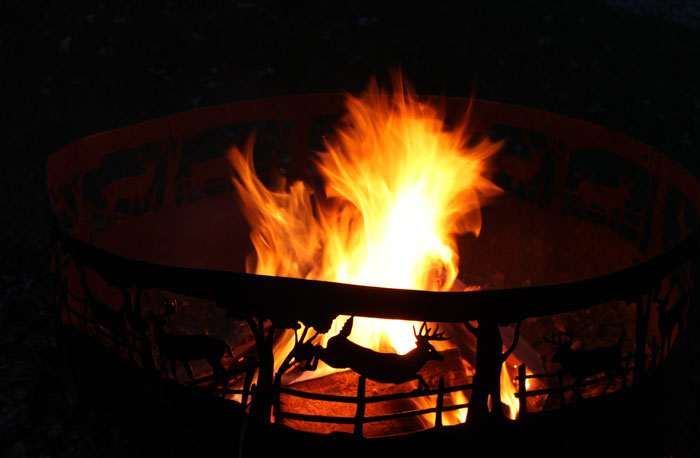 I love their fire pits. The jumping reindeer metal with the fire background is pretty cool.

Jeff got a refresher on dumping the black and grey tanks and learned that the starter kit that came with the trailer was crap. One of the first things on his list of “things to get” is a better hose — better as in longer and more flexible. He also hitched and unhitched the truck a few times.

Everything in Its Place

Our first camping trip was all about getting comfortable with our new addition. Everything pretty much has found its place inside the trailer and in the basement. At least it went from an overstuffed trailer… 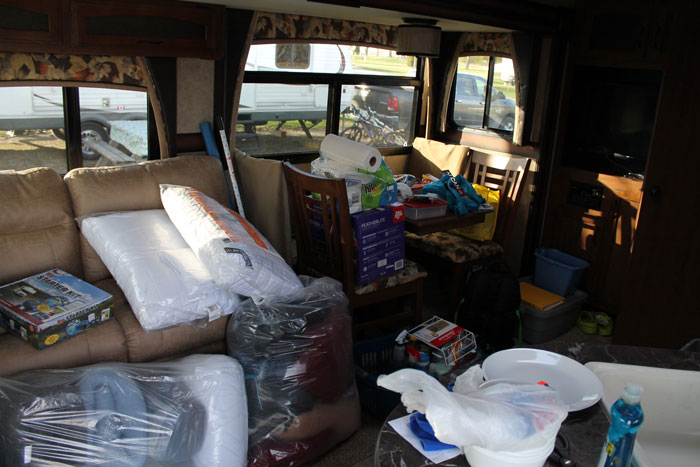 …to a space where a  teacher can do some work (a teacher’s work is never done!) 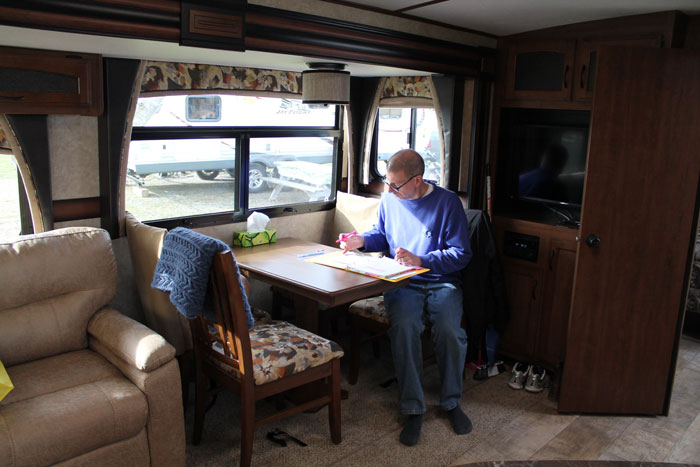 It was a short trip, two nights and a full day but I think we settled in pretty well.