Sakinah Hofler was born and raised in Newark, New Jersey. Growing up with a sharp tongue in a conservative household led to many stints of punishment, which led to ample time to read and write. However, after learning the words “starving artist” from her favorite childhood author, Ann M. Martin, she decided to push her dream of writing aside to become a well-fed scientist. 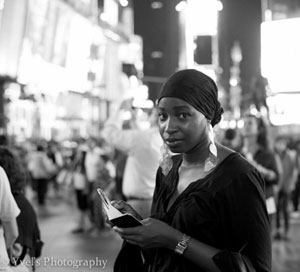 Sakinah received both a Bachelor’s degree in chemical engineering and a Master’s degree in engineering management from the New Jersey Institute of Technology. Within the first two months of working as a Chemical Engineer for the United States Department of Defense, she realized engineering was not for her. She filled up her free time with classes: acting classes, improv classes, French classes, and writing classes. She performed in a couple of one-act plays with the New Jersey School of Dramatic Arts. She auditioned (and received) a position with an amazing improv troupe called On The Spot. She wrote three (terrible) novels. However, as time went on and she moved up at her job, the pressure to quit her extra-curricular activities tripled. She stopped acting and left her troupe. She still needed classes to maintain her sanity so she continued with French and writing. She took classes at Gotham Writer’s Workshop, NYU, and the Writers Studio. Eventually the need to write overcame the pressure at her job. She decided to apply to an MFA program because she wanted to be in an environment where she could put writing first. Her first attempt garnered her eight rejections, three on the same day. Rejection made her want to work harder.

In the interim, she became a part of a wonderful writing group called “No M.A.P.s.” This group pushed her to leave her comfort zone and she was able to get her work published in Euonia Review and Counterexample Poetics.

She decided to apply to MFA programs again two years later and received several offers. She moonwalked out of her job and all the way down to Florida State University’s MFA creative writing program.

Currently, she holds the position for the Assistant Online Editor for the Southeast Review. In her free time, she practices French, exercises, and volunteers. She might have solved the problem of “starving artist” by learning how to cook. She lives in sunny Tallahassee, Florida with her boyfriend and photographer, Yvel Clovis.