Two of my older lenses were awarded purple stars this week. The first is kind of a strange lens. I can’t remember why I made it in the first place and it wasn’t incredibly popular until the beginning of this year. I’m talking about the Megan Fox Tattoo lens. It’s a basic lens with very […] 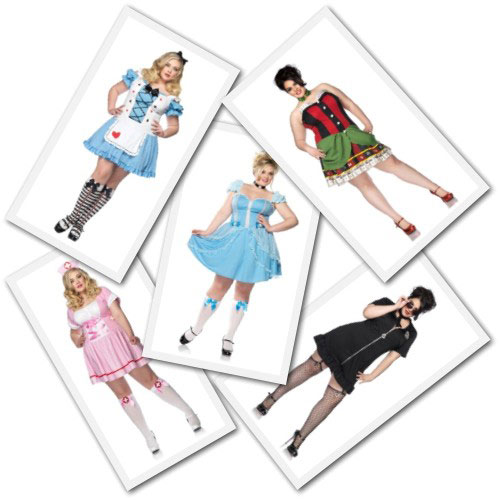 Torrid is gearing up for Halloween with even more costume options than ever — thirteen so far. Being Torrid you know their costumes are going to be a little edgier than what your mama used to dress you up in. Their plus size costumes are available in combo sizes 1/2 and 3/4 with prices ranging […]

You may think it is early but it is never to early for the fun and glamour of Halloween. And plus size retailer Torrid knows it. Besides all the really good costumes sell out early. Torrid has already introduced five new Halloween costumes for this year. All of them are $65.99 (not including some accessories) […]

Of all the Halloween costume providers out there I have been familiar with Halloweenie the longest. It isn’t high tech like some of the other costume sites out there but it does offer a good selection of costumes for plus size women (and men) at competitive prices. One of the things that originally drew me […]

I don’t watch the reality TV show about the Bounty Hunter but I’ve seen clips and know the main characters. When I visited Buy Costumes I was thrilled to see one for Beth the Bounty Hunter. Firstly, because she is plus size and secondly because it’s kind of narly. Considering all you get with this […]

Look who came for a visit!

Getting better slowly but surely. This Thursday wi

Went for a walk early this morning. Met a lovely b

Went out back for some fresh air and took a bunch

Out in yard birdwatching. Did a slow set of tai ch

Settled into hotel. Nice view. Have to be at PMH f